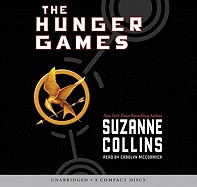 By Suzanne Collins
$39.99
Email or call for price.

Other Books in Series

This is book number 1 in the The Hunger Games series.

“This compelling, page-turning futuristic novel takes readers into a world that pits teenagers against each other in a fight to the death for the glory and well-being of their district. But when Katniss discovers the young man from her district is in love with her, she is faced with either having to kill him to survive or sacrificing herself to save him.”
— David Richardson, The Blue Marble, Fort Thomas, KY

A heart-stopping, page-turning first novel of a new YA trilogy from the author of the New York Times bestselling Underland Chronicles series.

Katniss is a 16-year-old girl living with her mother and younger sister in the poorest district of Panem, the remains of what used be the United States. Long ago the districts waged war on the Capitol and were defeated. As part of the surrender terms, each district agreed to send one boy and one girl to appear in an annual televised event called, "The Hunger Games." The terrain, rules, and level of audience participation may change but one thing is constant: kill or be killed. When Kat's sister is chosen by lottery, Kat steps up to go in her place.

Suzanne Collins' debut novel, Gregor the Overlander, the first book in The Underland Chronicles, received wide praise both in the United States and abroad. The series has been a New York Times bestseller and received numerous accolades. Also a writer for children's television, Suzanne lives with her family in Connecticut.

There are no products in your shopping cart.

Viewpoint Books partners with
Libro.fm to bring you the finest
in Audiobooks - sign up now!